This week the field trip was to choose a poster at http://americanart.si.edu/exhibitions/online/posters/aa.html.

I chose Rosie the Riveter and learned much more than you might imagine! This poster actually has some very interesting facts surrounding it! This research may be the moment where I fell in love with posters in relationship with art history. Fascinating! 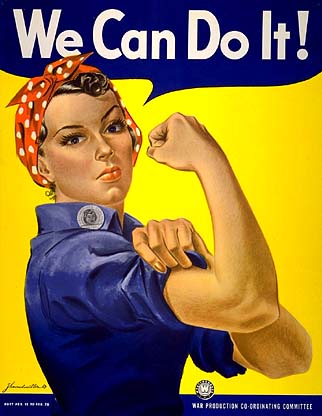 Rosie the Riveter – even though she was not originally an icon of my era, I grew up very familiar with this particular image of her because it was re-discovered in the 1970s and then given the title of “Rosie the Riveter”. Something interesting is that the woman whose photo was used in this photolithograph only worked at a factory for 2 weeks and then quit to find a job at a counter in a store for safety reasons. She also did not know she was the woman in this poster until much later in life and then insisted that she was not really Rosie when people would call her that. She lived into her 80s signing posters and happy to have been an unwitting part of history.  She passed away in the final week of 2010.

This poster was originally used by Westinghouse to encourage women to work in the factories and support the war effort.  In 1970 it was resurrected, called “Rosie the Riveter”, and became an icon of the feminist movement.

The style looks like it draws its influence from the “Poster Style (Plakatstil)”. It uses flat colors and is simplified in style. This style was starting up in Europe prior to the war and was a fresh look following the flowing lines and detail of the Art Nouveau posters.

Incidentally, the real Rosie was painted by Norman Rockwell for the Saturday Evening Post to commemorate the women helping with the war effort. She was a real riveter and her feet are on a copy of Mein Kampf, Hitler’s autobiography/ideology. 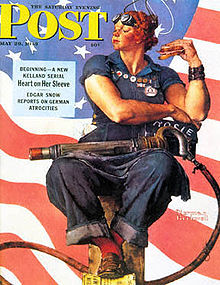