Final Project:  A book incorporating what we have learned this quarter in Design Concepts. 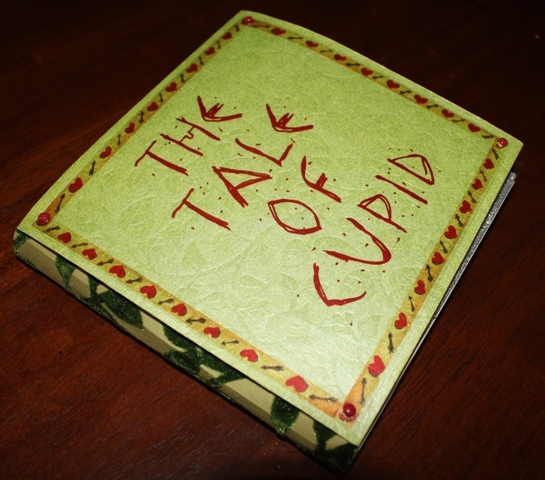 When I was a kid I was fascinated with mythology, fairy tales, and fables (probably because I did not really grasp the full context of the story.)  As an adult, I find many of these stories really disgusting, so when we were told to pull a name out of the container in our Design Concepts class, my immediate thought was, “God, I really do not want to do this.”

The answer seemed to come back:  “Accept the Situation…it’s just a class.”  So, I gave it up and was the first to pull a diety from the teacher’s cup.  I had probably 30 options and was praying I would not get Eros.  Voila, it turned out to be Eros, of course.  [Ok… yes, my friends who have known me all my life can really get the humor and irony of this particular choice (and they were sure to let me know that too!)  Do you think God might have a sense of humor in things like this? I was not laughing, though.]

However, I discovered that of all the stories, Eros is probably one of the more palatable!  Research elicited the suprising information that Eros’ story is the inspiration for Beauty and the Beast, and I actually found it a very interesting research project.  So much of our current verbage actually harks back to these ancient Greek stories.  Eros is also the same as the Roman diety, Cupid, and everyone has heard of him!

There were so many potential directions with this story; however, I opted to work from the premise that if you can’t lick ’em, join ’em, and chose to go with the humor of the situation.  I also despise cliches and overdone topics, so that was the problem I decided needed to be solved… how can I take this topic a different and unique direction when it has been done and overdone so very many times?

I will leave you to decide if I succeeded.  The design details are below the photos under the MORE tag.

Page 1 was an egg on black velvet paper for two reasons… it was the deepest black I could find and it was also going to be a “touch” book, so I needed things that could be felt.  An overlay of black feathers on acetate symbolized the bird. 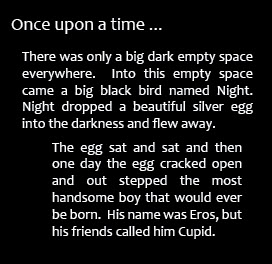 Page 2-3 was an illustrated spread.  The figures and Greek building to the right are raised off the page. 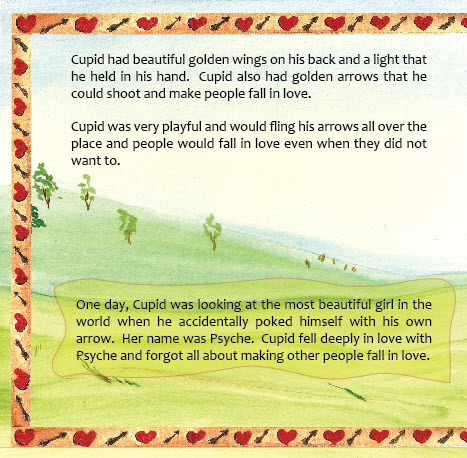 Page 4-5 has hand drawn, movable tags.  If you push them to the side, what they represent is written underneath, such as eHarmony.com, mail order brides, music, love potions, tv reality show such as The Bachelor, and matchmakers.

Page 5 has a letter with Greek type which is removable from the envelop.

Page 6 has embossed gold on the arrow and coming off of the broken arrow.  The words underneath say “Well…almost everyone.”  Basically demonstrating that even Cupid is not perfect.

I also decided to decorate the back of the book (not a requirement for the project.)  Below is a glimpse of how a portion of it looked when opened up with the two text panels enlarged. 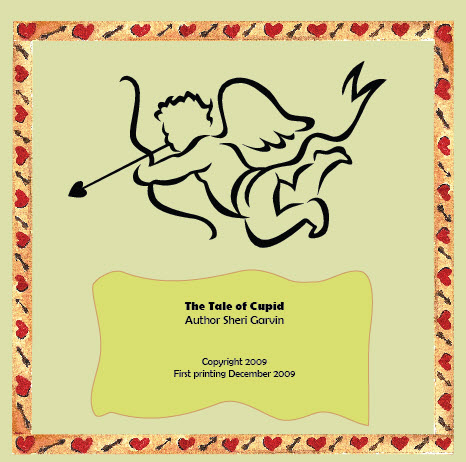 This was a 4 week project, so I am going to break it down:  By the way… I way over did this.  It took days to physically make it!  Most students put one of the requirements per page or on a two page spread.  Nobody wrote a storyline.  It seems I once again made it harder than necessary, but I had fun.

Week 1:  Research – I work with words, so as I researched (I hit the library and even the children’s section, which was more G-rated in the mythology department.) I listed words that pertained to Eros/Cupid and then organized them into the categories we were working with.  Also we had to create 100 thumbnails – 20 of each of the main categories.  At this point I began to formulate the storyline and bounce it off my roomies for input.

Week 2: We built the physical foundation of the book in class and began a mockout/rough of our book.

Week 3: We drew actual sized roughs of each page and reviewed them with Beth (instructor).  At this point I pretty much knew what I was doing, so drawing the roughs was actually a frustrating step.  I also blocked out the text areas and did not show what was going to be on the final two pages.  This was to be a suprise for Beth and she played along, allowing me to “do my thing.”  That was fun and I am not unmindful of the amount of trust she was placing in me!

My concept was to be a children’s book, I already had the story written and split on each page.  It was also to be an interactive and tactile experience, so each page had to have something happening that would encourage touch.

Below is how I tackled the requirements.  I wanted to create a theme and flow so that it wasn’t just one item per page:

Week 4:  The presentation – I had butterflies in my stomach!  I could not believe it.  I have been in front of CEOs, managers, directors etc.  of companies such as Lilly, Sallie Mae, Phizer, and the list goes on, with not even a quiver.  And I have taught thousands of students, but to get up in front of my fellow students and read my story was a tad rattling!  It went well and Beth informed me that she has never had someone write a story before.  (I  asked the class to pretend they were 5 again and I read it to them as if we were in gradeschool.)

Again… this was FUN and yes, I received an A on it.