The final for Fundamentals of Design:  “Joy of His Coming”

Having cut my reading eye-teeth on classic literature, for a few moments I was overwhelmed (as in did I choose from Dickens or Five Little Peppers and How They Grew? What a variety!)  Then I broke down my own criteria.  Namely, since we were going to be working on this by creating thumbnails and talking about it for 3-4 weeks, I wanted a positive emotion.  Also, I wanted something that would add to my own growth as a person and as an artist.

Whew…next time, someone pinch me and say “make it easy, you goof!”

I chose a Bible passage that has been intriguing me ever since my nephew, Simeon, was born almost 2 years ago.  Bible – Luke 2: 21-33 (NIV) – Excerpt included in portion below:

25Now there was a man in Jerusalem called Simeon, who was righteous and devout. He was waiting for the consolation of Israel, and the Holy Spirit was upon him. 26It had been revealed to him by the Holy Spirit that he would not die before he had seen the Lord’s Christ. 27Moved by the Spirit, he went into the temple courts. When the parents brought in the child Jesus to do for him what the custom of the Law required, 28Simeon took him in his arms and praised God, saying:
29“Sovereign Lord, as you have promised, you now dismiss your servant in peace. 30For my eyes have seen your salvation, 31which you have prepared in the sight of all people, 32a light for revelation to the Gentiles and for glory to your people Israel.”

I have never created an emotion without symbolism before, abstracts not being my “thing”, so this challenge was painful in many ways.  That being so, I decided to document the process in order to help myself later on down the road (and maybe share the angst a little?)

FIRST:  I created a list of emotions I thought the old priest would have been feeling.

I really wanted to become empathetic and connect with Simeon the priest.  This connecting took all 3 weeks (off and on) as I “discovered” new things about Simeon by delving into my own spiritual walk, beliefs, hopes, feelings.  It is like I almost know him in some ways now!

SECOND:  Hone in on the elements and the feelings I wanted to deal with (there are so many in just this one small passage!)

Worship, joy, praise, release, awe, a sense of “God has it all in control and I am held in His loving Hands”

I also had a lot of thoughts tumbling around such as how we lift our hands when praising.  Also at times of great spiritual joy and triumph people will often dance.

How to convey all this?

I have never thumbnailed much and never an abstract, of course.  It was really messy in so many ways.  Below is the good, the mostly bad, and the quite so very ugly, I am hiding nothing… (anyone know about chaos theory? Then you might grasp some of the process. [ ie you often have to create disorder in order to have order.]) 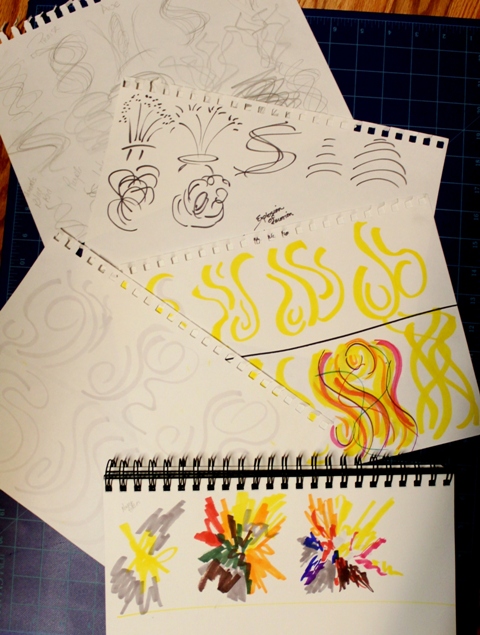 FOURTH: Decide upon which thumbnail form I want to concentrate on and a medium and start creating.

I love working with pastels and felt I could recreate the feeling with them much better than with stiff acrylics.  Below are some of my attempts and my takover of the kitchen island… (this was a piece I realized I needed to stand to do.)

FIFTH: Pray for inspiration because it was just NOT happening (and pulse your Facebook friends for feedback…feedback will often help break through the creative block at this stage.)

I knew what I wanted, but it would not come no matter how many times I tried.  So I put this out there:  (And as fellow student friend, Rachel, noted, this had a look of flames…what I was NOT wanting! But where to take it? I was trying to capture the feeling of warmth and security along with praise and worship.) 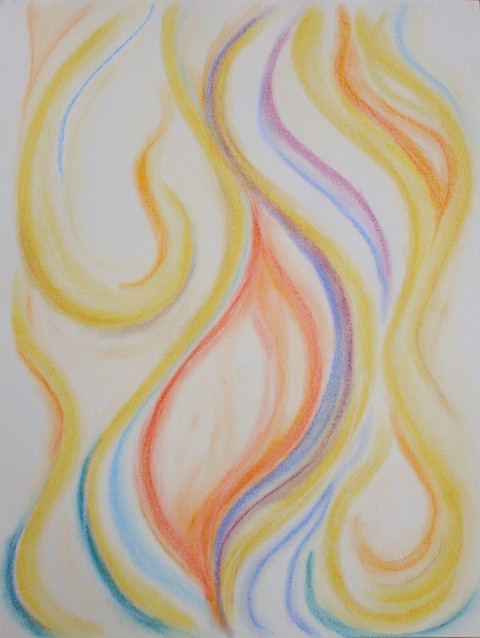 This is also the point in time I did a little color meaning research just to refresh my memory on the meaning of color.  Of course, it always depends upon your subject.  Yellow is joy, oranges are warm and happy, red was passion, purple-royal, blue-heavenly, green-safety.  I decided to add some green and reduce the level of reds.

SIXTH:  Try it one more time and then finish it with a bit of Divine intervention.

On the Tues afternoon before it was due (3 weeks after it had been assigned, mind you!) God brought the inspiration via my Jewish friend and housemate, Lainey.

Lainey came home from work early that day to find me in a terrific struggle with the piece that was to become my final.  I had the basic concept but it was lacking feeling.  I was looking at her and describing Simeon’s world as I saw it, suddenly we both exclaimed in almost unison, “this is Jewish art!”  The colors and forms are what you see in Jewish art! Wow!

Lainey, my sweet Jewish friend, then began singing a joyful Hebrew song and doing a dance around the kitchen.  If you have ever seen Jewish singing and dancing, it is something really special as it is a building of worship bringing the singer/dancer slowly into the Presence of the Almighty.  (I think we Gentiles could learn something from our Jewish counterparts on how to approach God!)  As soon as she did that, inspiration struck and I finished the piece right there on the spot – only adding a few defining strokes here and there throughout the evening.

How appropriate that my inspiration for the connection to a Jewish rabbi of 2000 years ago came through a Jewish woman of this era, who loves God and is currently in the spirit of connectedness as she observes her High Holy Days – Rosh Hoshana.

This piece is about the spirit of worship and the joy of an eons old God-promise being fullfilled.

Enjoy it with the joy of the Lord in your heart! 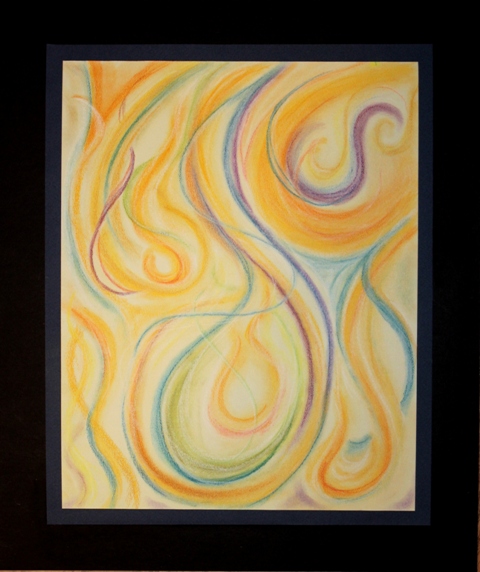