This class took the most effort, but was the biggest disappointment of the quarter.

I walked into this class more lackadaisical than I should have and with an expectation that everyone would just do what they told the team they were going to do. It did not work that way.

The team assigned me the role of organizing the chaos, since that is what I do in my business life. I chose to do this with a work breakdown structure and meeting minutes; however, you have to have team members with a willingness to work for the good of the team in order to make these effective, and that is where things fell apart.

Unfortunately, my intense business organization was misinterpreted and seen as being too detailed… maybe too controlling, though it was never meant as such. The only word I can really come up with to describe it is “sadness”,  sadness at the misinterpretation and the sadness that I was unable to fix it once it went awry. The latter part of the quarter was overshadowed with this sorrow and frustration, because we just couldn’t seem to get it together to meet with our original plan and vision. And it was such a good one!

The basis of our project was to “sell” a product. We chose to sell graffiti. I was responsible for pulling together the artwork from the other team members into a catalog, as well as the t-shirts we wore for the final presentation.

The team did an excellent job coming up with the company name, INVent (for Indiana Vent) and the accompanying logo (both powerful and effective!):

The catalog was split – one side featured the work of the individual artists on the team.

Flip it over and the other side featured the products we were “selling” that had the art on them.

The t-shirts were accomplished by spray painting a black t-shirt with basic everyday white spray paint and a template.

I will have to say, one team member in particular really impressed me.

His name is Sean and he was graduating this quarter and joining the Navy in Jan. The Navy will love him and will know how to use his abilities, for sure! He is organized, motivated, has a great attitude and I gained a lot of respect for the young man. He is going to go far no matter what he does, and I see the potential of great leadership within him.

The other pieces of the project were supplied (or not) by the other team members. Below are a couple examples of the art work provided by Sean.

Guerrilla advertising – meaning he went out to a train yard and tagged some box cars as well as a wall or two. 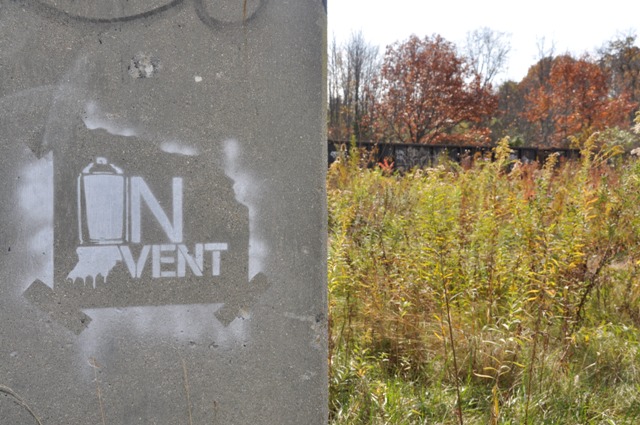 Wall tagged at a train yard

Drawing a design on a model’s back (a removable tattoo):

We photographed a model and later overlaid designs on the t-shirt. This is one of Sean’s pieces, as well as the logo. 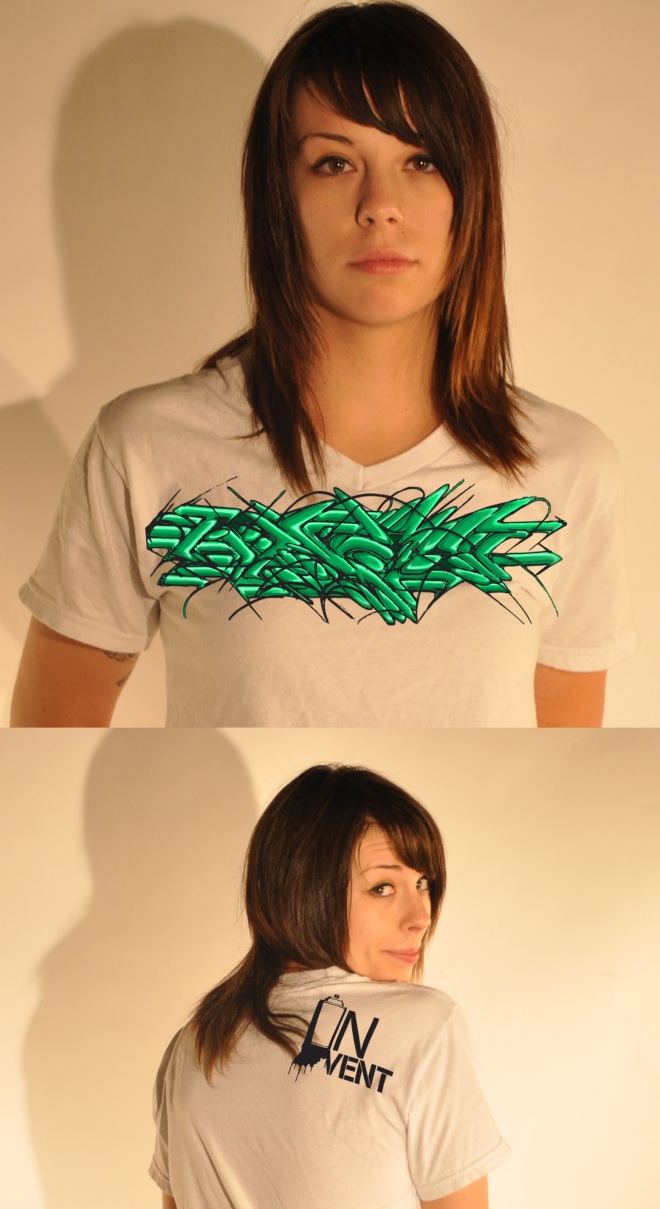 While I am sad at the frustrating experience we all had, we did end up pulling off a project in the end. Some of the pieces by individuals were not met, but the catalog, which was the biggest and most complex deliverable, was completed. We had to create 4 of these. One for each team member.

I also gained some personal insights and lessons learned that I am not likely to forget in a long time. It gave me the impetus to start on the job hunting trail with an unparalleled determination. I am ready to get back into the real world with real projects.